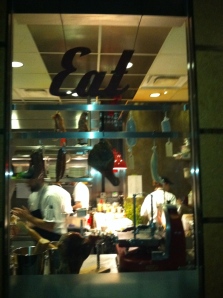 They sure know how to treat a lady in Atlanta. And I don’t just mean all that holding doors stuff. As someone who grew up in the south’ish, I’ll admit traveling to Atlanta g-free made me nervous. Things I knew I would miss out on include, fried chicken, and, well, fried anything.

Being pleasantly surprised at gluten-free options seems to be my thing these days, so I shouldn’t have been surprised by my Atlanta gf bounty. Apparently I’m incredibly easy to surprise, because I’m still excited over my crazy dinner last night, that did not contain one iota of the sticky stuff. Whoo-hooo! But first, the reason I’m here in A-town, is for the annual BlogHer Food Conference. And those ladies, they know their audience. Check out the breakfast table — 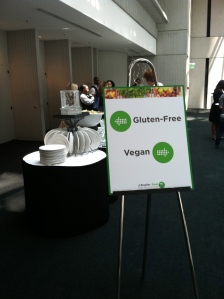 That’s right, a WHOLE table dedicated to us celiac types. This, at every meal! Way to stay classy, BlogHer. You can also see they made room for those freaky vegans. (I kid. You guys are no more freaky than I.) I was also stoked to  hang out at a few of the sponsor tables where Bob’s Red Mill had an array of g-free products to show off. They were also so kind as to give me some hot cereal samples, gluten-free, of course. Which will go perfectly with the other sponsor — Scharffen Berger — as I melt chocolate over my breakfast cereal. Because, really, what else am I going to do with all those free chocolate bars? Share them with my family? As if.

But my best meal(s) came off-campus, when the Cooking with My Kid crew and I went out on the town. First, we headed over to Holeman & Finch. You can see that it’s going to be a meat-a-rific night as soon as you walk in the door (see first photo, above), and if that isn’t enough of a clue the “parts” section on the menu will surely alert you to the meat-loving, farm to table, vibe of this hip Atlanta eatery. Yes, there were waiters wearing Converse.

“The thing” about Holeman & Finch is their nightly burger bonanza. Except burgers aren’t actually on the menu. Instead, at around 9:50pm they announce that it’s burger time, and you have to snap them up since they only make 24. Once they’re gone, they’re gone. But we went to dinner earlier in the evening, so instead enjoyed the small plates (gluten-free!) and chowed on pork rilette, strip steak, polenta and oyster mushrooms, chorizo, a lovely cheese plate that included bresaola, and gratin of marrow. So naturally when we were wrapping up our dinner and they announced the march of the burgers, we couldn’t eat another bite. Except that we totally could, and ordered up three amazing burgers, with double meat, onions lovingly placed between the patties, smothered in cheese. Here’s my gf version – 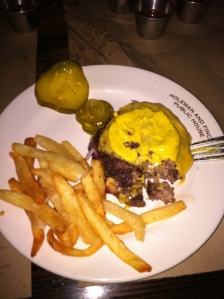 I’m proud to say three women ate two dinners that night. And every single bite was delicious, and gluten-free. Meat helps with that whole “no gluten” request. Clearly, I had enough to last me the rest of the month. Or so I thought.

The next night we headed to Restaurant Eugene, where we had the pleasure of hanging out with a James Beard nominated chef. Also, our wonderful waiter, Greg*. When I gave my gluten-free speech, this is what he did for me —

Umm, yeah, I ordered the riverview farm pork belly. Wouldn’t you? Especially after the previous evening of meat loading? Greg’s code for the celiac diner can be interpreted thusly: Check mark = a-okay, check mark with circles and Xs means okay, but ask for X item to be removed, big X means stay away, celiac. Nice, right? I also enjoyed the butterhead lettuces, sans crisp shallots. What was especially entertaining was dining with other food bloggers, because we got to all act crazy about food and drink and nobody judged. Except Greg. He was a wee bit judgy. But that’s okay, because the whole experience was simply amazing, and not once was I jealous of those other gluten-having diners around me. RAD.

So get thee to Atlanta, celiacs. There’s enough meat for all of ya’ll.

*Greg asked not to be identified because he felt his menu assault was quite unseemly, if not incredibly helpful. But I know your real name, Greg. And I’m keeping your secret — for now.

6 thoughts on “Gluten-Free Atlanta: Meat is the Word”