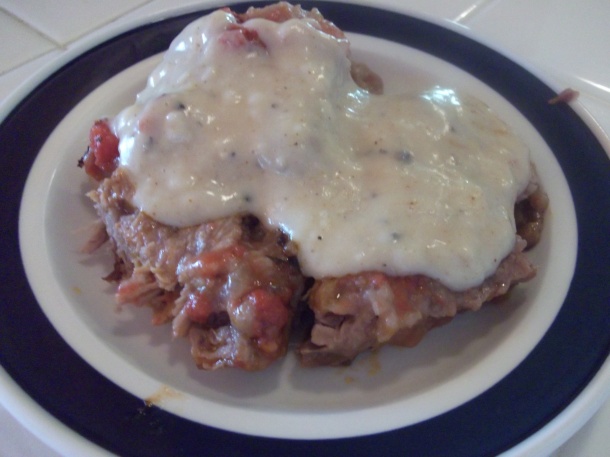 Welcome back to Cooking For God, gluten-free style. When my mother-in-law brought me back a Mormon cookbook from Utah I thought, what in the heck am I going to do with this? My Mormon friends don’t seem to require their own cuisine. But I have now seen the light and realize how much I can really use this cookbook that is inspired by the great culinary gifts from, “. . . Europe, Australia, New Zealand and the United States.” (Downtown Europe?) Which means this cookbook is the exact same kind of food you would find where I grew up —  lily-white Oklahoma, buckle of the Bible Belt.

Naturally, I was very familiar with the variety of meat type recipes I found between the pages of Mormon Cooking: Authentic Recipes, but I bypassed Country Beef Pie and settled on Savory Swiss Steak, which I then smothered in Mormon Gravy. Good choice? Lord knows. 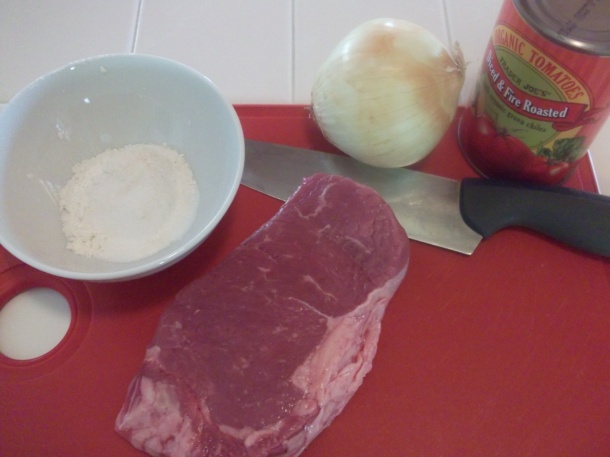 The best thing about the Savory Swiss Steak recipe, is that it required so few ingredients. What you see above, is basically what you need. The toughest thing about this recipe was finding a round steak, aka, chuck steak in Los Angeles. No one even knows what that is in produce-heavy Southern California, so I had to grab a ribeye. People seriously need to learn about chicken fried steak up in here. 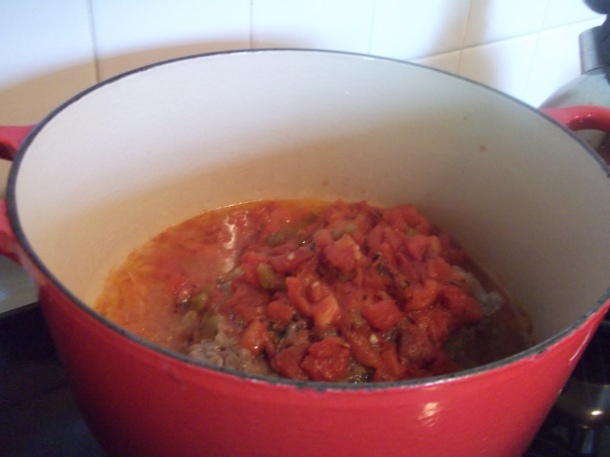 This is what Savory Swiss Steak looks like cooking. Yes, it smells that way too. If you need me to break it down for you, that’s the smell of your neighbor’s house around 1pm on a Sunday afternoon. And that’s what it tastes like too. Which is why I felt the need to smother in Mormon Gravy. 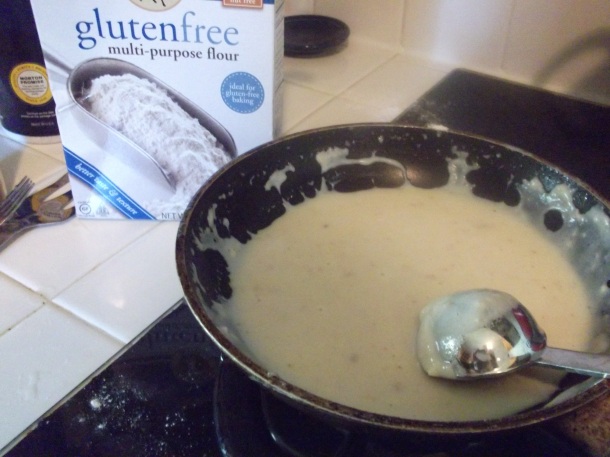 Turns out Mormon Gravy is exactly like Protestant in Oklahoma gravy, but with one secret ingredient: paprika! I just blew the lid off Mormon Gravy.

So if you want to live like the Mormons, or the rest of the white people in America who are of mixed white ancestry, try these recipes at your next Sunday supper.

1. Mix salt and flour, chop or pound into meat on both sides.

2. Brown both sides of steak in oil.

3. Add onions and cook until tender. Add tomatoes and cover tightly and simmer for two hours, or bake in oven at 300 degrees for three hours, using a heavy pan with a tight-fitting lid.

1. Remove any meat from pan and measure fat. Return desired amount of fat to skillet.

3. Remove from heat and add milk, stirring well to blend.

4. Return to heat and cook and stir until mixture is thick and smooth. Season to taste.

One thought on “Cooking For God: Gluten-Free Mormon Gravy on Savory Swiss Steak”