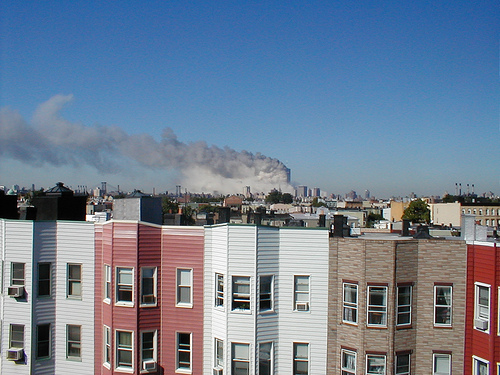 Most people won’t associate gluten and the horrors of September 11, 2001. I mean, duh. I wouldn’t have either if I hadn’t been spending so much time in the bathroom after a gluten-ing earlier this week, and therefore was able to read the extensive New York magazine encyclopedia of 9/11, ten years later. And it all comes back: From the futility of having the hospitals on standby, to the weirdness of the mayoral election. After avoiding books, movies, even discussions of September 11th for ten years, it was probably time that I tried to stop avoiding thinking about that day. I guess.

As one of the millions of people living in New York City on September 11th, I obviously was in the path. But aside from the darkest memory of that day — thinking a friend had died when our phone connection cut off as the second tower fell — I’d simply pushed away everything else that happened then. That memory, however, will never go away. The others I’ve simply shelved and it seems that this week is the appropriate time for them to come rushing back: The fighter jets flying over my apartment, the day I tried to meet friends in Central Park and instead we ran home after the winds shifted, bringing the smoke and stench uptown, and into our lungs. Giving blood, and then getting sick because I hadn’t slept or eaten. Ending a relationship because he didn’t seem to be so upset about the whole thing, and in fact went right to bed that night as I stayed up most of the night obsessively watching CNN and trying to figure out what in the hell just happened, and what was next. Finally leaving the city for a weekend, and getting hysterical during a ferry to ride to Martha’s Vineyard which seemed to be the exact opposite of what I left behind, as I couldn’t figure out if that was a good or a bad thing. Evacuating my office building in Times Square after a bomb threat was made nearby. And the one moment I’d love to forget, watching without words as a young man attacked another young man who appeared to be of Middle Eastern descent on the subway just out of raw fear. Instead of screaming for him to stop, I just sat there and cried at what my city had become, feeling helpless, confused, and wrecked.

I recently came up on a photo album I had created a few months post-9/11. I had wandered from midtown up to my apartment on the Upper East Side, taking photographs of everything I loved about New York City. Trying to talk myself into being happy again in a truly effed up place. I pledged my loyalty to New York, even as I traveled to Los Angeles to see if maybe I wouldn’t want to live there instead. I didn’t, and swore I never would. Which is probably why I met, and married a native Californian a few years later. Never say never.

I don’t know what good can come out of remembering that time, even as I’m writing this. It was dark, it was painful, and it was life-changing. We all have our stories about that day, some far worse than others. I’m lucky my friends who lived and worked nearby were able to escape with only emotional injuries. I’m lucky that no one I knew was flying that day. I’m lucky that I re-prioritized my life and took a different path that has led me to my husband, my two wonderful children, and a life that I love. And I was lucky to be a New Yorker. I’ll always feel like a New Yorker, even though I’m enjoying the Southern California lifestyle now. September 11th is certainly part of that, but not all.

When I stop to think about September 11th, I also remember, vividly, the night before when my girlfriend and I ran from a huge rainstorm after having dinner and cocktails at the Rodeo bar. I had on red Converse sneakers — per usual — and they bled all over my socks, turning them pink. I mostly remember that moment because we were soaked, running down 3rd Avenue back to her apartment, and it was the last time I felt easy. Ten years may dull that feeling of having to be ever vigilant — and it does — but we’ll never truly go back to that beautiful, free, place where feeling vulnerable was something you just talked about in acting class.

I always say I have no words to describe September 11th and the aftermath of living in a city that was brutally attacked. But here they are.