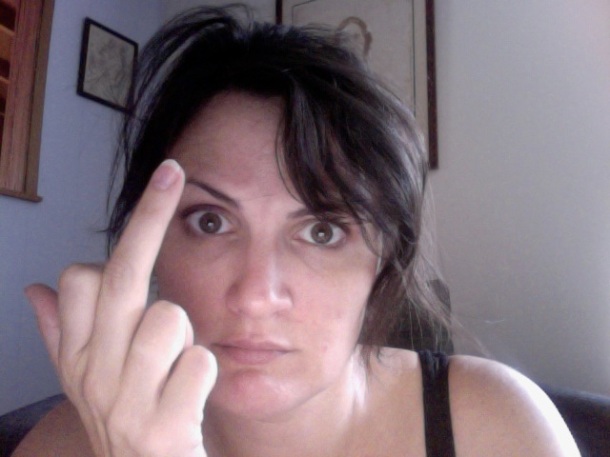 Just when I was all, “My birthday was better than your birthday, suckas!!!” I go and get gluten’d. If you’re a regular reader of this site, you’ll know that this isn’t the first time this has happened. It is, however, the first time I’m so freaking pissed off about it that I want to throw things. Why? Because it was my birthday, that’s why. And I had just enjoyed what I thought was a lovely impromptu dinner with awesome friends and you want to savor those memories. You know when you’re like, “Wow, that night was so amazing, except for getting held up at gunpoint.”* It’s like that.

So I’m all at home basking in my last birthday blast glow, the husband is preparing us a nightcap, and I’m pretty sure I’m going to get lucky on my birthday. And then, there it is.

Therefore, eff you Delphine. This may sound paranoid — okay, it totally sounds paranoid — but I’m convinced someone in the chain of restaurant service messed up through negligence or malice, as I was very clear with our server about my stupid gluten issues. I’m not a total a-hole unlike these people, and try to show my appreciation, like continuously so they know that I know this is a pain in the ass. The waitress may have been slow as hell, but she appeared confident in her answers and even (supposedly) checked with the chef. Which makes me wonder how I’m suddenly violently, painfully, ill within seconds of getting home, and therefore ruining any chances of birthday sex.

Here’s the deal. If I suspect you’re just being a jackass and I get gluten’d, the shit is going to hit the fan. And a lot of other places. ‘Cuz this is what’s going to happen the next time someone slips me some gluten.

If anyone else has any evil suggestions for me, please send them my way. I’m ready to go cra-zy.

*This, incidentally, also totally happened. But not on my birthday.