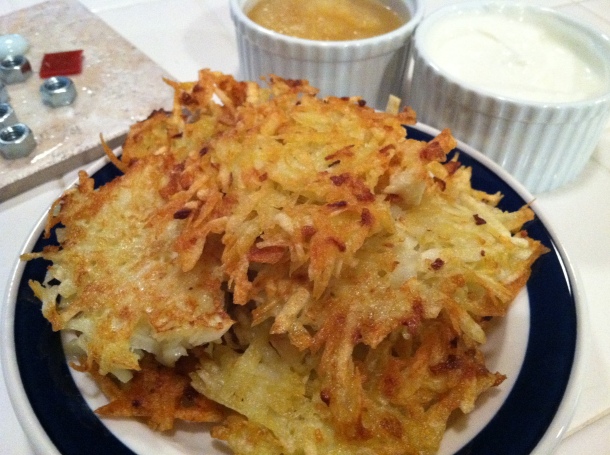 You cannot have the Hanukkah without some lovely fried potato pancakes, or as the chosen people call them — latkes. Even though my own Protestant mother used to make potato pancakes with leftover mashed potatoes (ohemgee, yummm), I’m determined to make these ‘cakes the way my husband usually does: Jewish style.

Now, I’ve fried many a food item in my day, but I took one look at this latke recipe that is naturally gluten-free and I totally do not get how you can make something fry in a patty without flour. Even hash browns at Denny’s come from some kind of super pressing  machine, right? Or something?

Yet I do love a recipe with very few ingredients, and this is all you need: potatoes, onion, salt, water, egg and oil. Oh, and this awesome menorah my two-year-old made in pre-school: 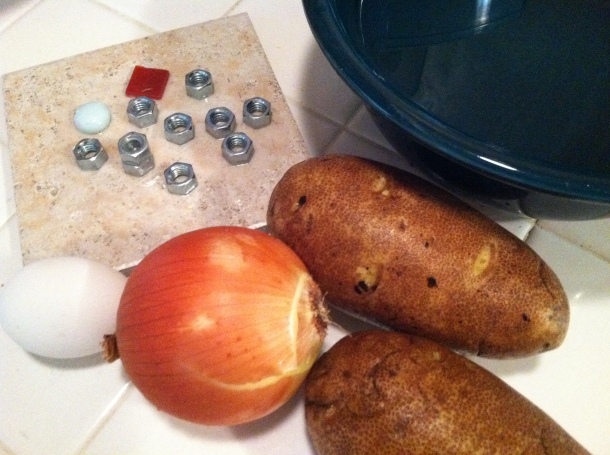 Yes, he does have a gift.

You know who else does? My daughter, who did all the squeezing of the ‘taters in a kitchen towel, like so. 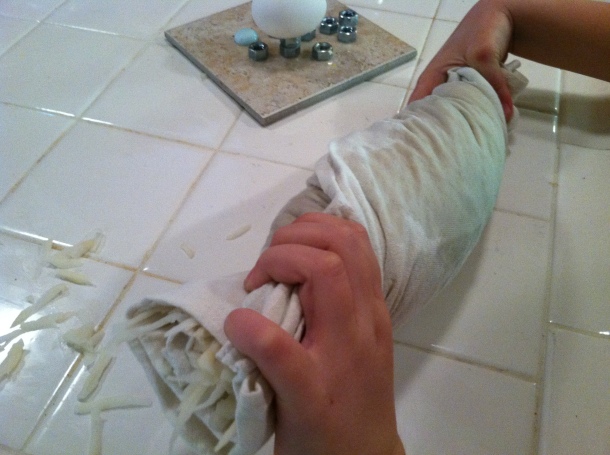 And this kid HATES potatoes! But that’s how you do it, people. No, I don’t know why we keep the menorah in the kitchen.

But I do know how amazing these latkes are. Which is, so amazing. In fact, my husband and I ate all but two of them while my toddler was napping. Sadly, he woke up and ate the last two and then he cried for more. Of course there were no more, because we couldn’t help but stuff ourselves while he was completely unaware of the deliciousness going on in his own home.

2. Peel potatoes and coarsely grate by hand, transferring to a large bowl of cold water as grated. Soak potatoes 1 to 2 minutes after last batch is added to water, then drain well in a colander.

3. Spread grated potatoes and onion on a kitchen towel and roll up jelly-roll style. Twist towel tightly to wring out as much liquid as possible. Transfer potato mixture to a bowl and stir in egg and salt.

4. Heat 1/4 cup oil in a 12-inch nonstick skillet over moderately high heat until hot but not smoking. Working in batches of 4 latkes, spoon 2 tablespoons potato mixture per latke into skillet, spreading into 3-inch rounds with a fork. Reduce heat to moderate and cook until undersides are browned, about 5 minutes. Turn latkes over and cook until undersides are browned, about 5 minutes more. Transfer to paper towels to drain and season with salt. Add more oil to skillet as needed. Keep latkes warm on a wire rack set in a shallow baking pan in oven.

5. Serve with applesauce and sour cream.

15 thoughts on “Gluten-Free Latke Recipe From a Celiac Shiksa”