How crazy do I look, here? Really?

So as everyone within a 20-mile radius knows, I’m going to the Oscars this weekend. What everyone may not know (and I didn’t even know earlier this week) is that I got to go to a sneak preview of Wolfgang Puck’s menu for the Governor’s Ball, where all the Hollywood stars head to get their eat on after they’ve picked up their gold statues. You guys, I got to sample the meal that Ryan Gosling would be eating had he not been robbed of an Academy Award nomination. Except, I didn’t at all because of all the gluten.  (Insert sad face here.)

I know Gosling feels for me, if this tumblr blog is to be believed, but I’m even more concerned about fellow gluten-hater, Zooey Deschanel. While she’s not nominated for an Oscar, Zooey is most definitely an A-lister who could score a ticket to the hottest dinner in town. But I’m here to warn you: Deschanel, stay away from the biggest ball in Hollywood. It’s all covered in gluten. This kind of gluten.

First of all, the Governor’s Ball must invite lots of starving people who are gold-poor, as the menu offers 14 appetizers, 10 small plates, a sushi and seafood buffet, 29 desserts, and three menu items that are covered in actual gold. Gold, by the way is totally gluten-free. I’m going to start eating my fill right away. I would have to, because apparently Wolfgang did not get the memo that gluten-free is hella’ trendy. Every dang thing I was offered had gluten all over it, and the rest of the menu did not seem to care about the gf among the Hollywood set either. See? Here’s Wolfie in front of a giant chicken pot pie. 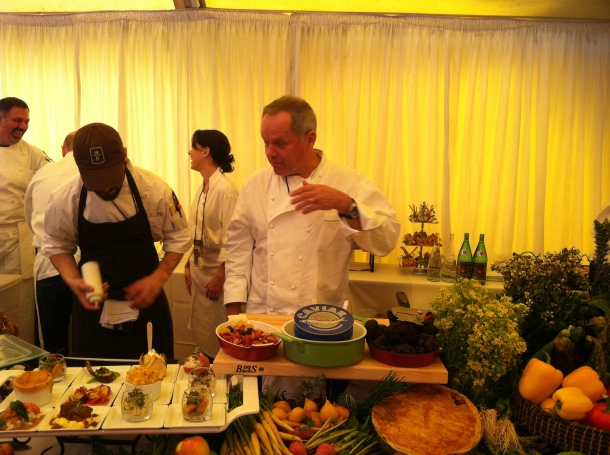 I did try the spicy tuna tartare in miso cones with masago, but that’s just because I had to turn down the pizza with caviar, the kobe beef sliders, and the arrancini. I was feeling desperate and I just grabbed that sucker and shoved it in my mouth. This one – 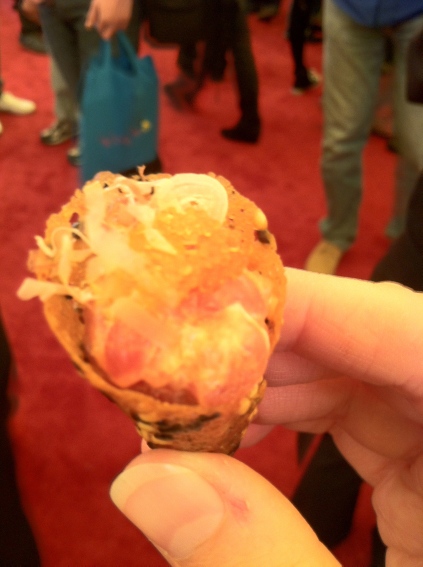 I think that’s caviar on there. And gluten. I did feel a little bit sick later, so it probably was. But seriously was I not going to eat Wolfgang Puck’s spread?

But again, this isn’t about me. It’s about Zooey Deschanel. Can someone, anyone, make this adorable lady a gluten-free dinner for Oscar night? I know she’s way too polite to ask for it herself, so I’m going to do it for her. Puck, please pull out the rice flour for Zooey Deschanel at the Governor’s Ball. She’s lovely, and I’m sure she would hate to poop her pants on Hollywood’s most glamorous evening.