Here’s the thing about gluten-free pizza. It’s hard to get it right. It’s also one of those things that when you crave it, you kind of need to have it RIGHT NOW. I’ve been lucky here in Los Angeles in that I enjoy Lucifer’s gluten-free pizza in Los Feliz. And when I went to San Francisco I was totally stoked about Amici’s, but I have to say I’ve eaten more crappy gluten-free pizza than good. So when I was in Austin, Texas, home of two of my absolute favorite full-on gluten-filled pizza places (can I get a hell yeah for Mangia and Conan’s?) I thought I could get a great pie since I was also in the gluten-free capital of the world. Turns out, it was more challenging than that.

Another great pizza spot, conveniently located down the street from where my brother lives and where we were all staying, is Home Slice. So I called them with my fingers crossed and they said they were working on finding a gluten-free crust. However, they had not found one they loved yet, but to check back. Right on, Home Slice. As I said on the phone, “Keep on keepin’ on,” and the dude responded in kind. I was in Austin, anyway.

Then I called up Southside Flying Pizza, and this is the place where gluten-free magic happens – 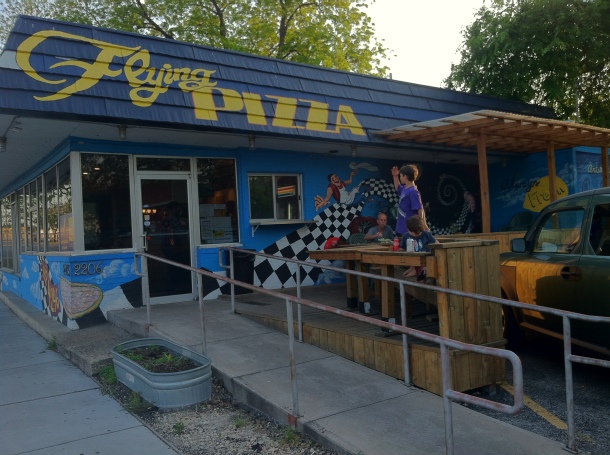 Very Austin-like, yes? At Southside, they make their own gluten-free crust so you’re not getting something that’s been sitting in the freezer. It’s freshly made, and all their own. Which is probably why it looks fantastic and like a normal pizza crust, but taste more like an artisan bread. This could be considered awesome, unless you’re in the throes of “Give me traditional pizza crust now, bitches!” like I was. Still, mad props for the homemade gluten-free crust. Hell, mad props for anyone trying to get the gluten-free up in here. So if you’re feeling like you want some fancy gf crust, this is your spot.

Have you had fantastic gluten-free pizza in Austin? Do tell.