Meet the most adorable couple in the entire world. That’s Tonya, Paul, and Boddington. Boddington wasn’t allowed at the wedding, yet people like me — people with food issues — totally were. Doesn’t seem fair, does it?

So this was basically the most amazing gluten-free wedding of all time, aside from Chelsea Clinton’s. But I wasn’t invited to Chelsea’s, so screw that wedding. I was, however, invited to Paul and Tonya’s beautiful SoCal event by the ocean since Paul — one half of the nicest couple in the universe — works with my husband. Lucky me.

When I was first diagnosed with Celiac disease, I remember specifically being upset about the prospect of going to weddings. Previously, I was a big fan of the wedding, especially the surf and turf and cake. I knew my days of eating sugary white frosting were over, and I knew my tears at weddings would be over my own personal cake loss, rather than the beautiful union taking place.

This is the first wedding I’ve attended since the big C, and being the least important guest at said wedding (work guest’s wife should be pretty low on the totem pole, amiright?), I didn’t expect to even be able to say more than, “Congratulations” to the happy couple, one of whom I had never even met, and then be ushered to the back corner of a dark hall where I’d have to strain to hear the awkward toasts of friends and relatives. Yet, the first thing I saw when I walked into the reception at the beautiful La Venta Inn was this —

Maybe you’re looking at that wedding cake like and wondering if it’s gluten-free. It’s not. But did you see what was right next to it?

Macaroons. French-style fancy pants macaroons that are totally gf and so decadent I didn’t even cry over the cake. I was already so stoked about the fact that I got to eat dessert at a wedding I ordered up my first G&T of the season and sat down out of the way of family members, distinguished guests, and lifelong friends. You guys are never going to believe what happened next.

Amidst the passed hors d’oeuvres of mini cheeseburgers and ahi tuna on wonton, this guy shows up and asks if I’m gluten-free.

Do you see how they did that? Burger on lettuce wrap, ahi on lettuce wrap = super happy gluten-free wedding guest who wonders what she did in a past life to deserve this kind of treatment. Apparently I lucked out because it seemed there was another guest with the sprue, maybe two? Because that guy was totally dispatched to save us gluten-haters from appetizer envy, and I was merely his first stop. 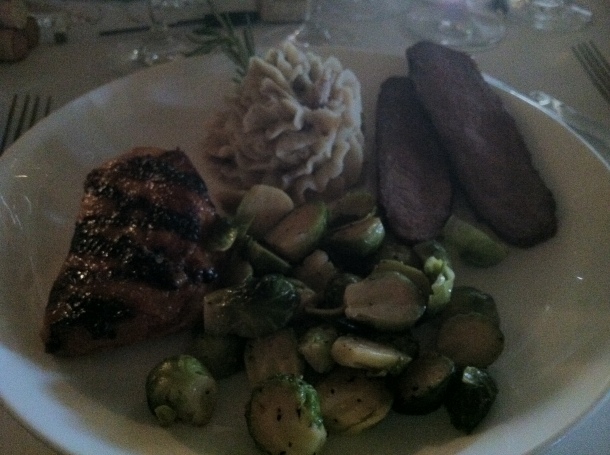 At this point I found myself feeling sorry for anyone who had never met Paul or Tonya and were therefore, not invited to this wedding. And feeling like we totally should have spent more money on their wedding gift. If that wasn’t enough amaze-oids, one of Paul’s friends, a Mr. Mike O’Connor who was also assigned to table #9, wrote out a recipe for me for gluten-free white chocolate cookies and cream fudge. Apparently he has a niece, or a girlfriend’s nephew, or someone who is gluten-free that he makes treats for to make his/her little gluten-free tummy feel good. I wish I could remember more info, but at that point I was all high on gluten-free life and G&Ts. But you see what I’m saying about this event? Crazy nice people who make treats for small children, and are willing to write it out at a wedding for the person they just met. But Mike did not stop there. He also wrote a note on the recipe informing me that Cheetos are gluten-free. How did I not know this? Mike made sure I wouldn’t forget it. SERIOUSLY. THAT HAPPENED.

So yeah, I just went to a wedding filled with adorable, considerate to the nth degree people, where gluten-free amazingness was around every corner. I’m still in shock. God, I hope my husband never has to fire that guy for sexual misconduct and/or office supply reasons.

Have you ever been to a gluten-free friendly wedding? Honestly, I didn’t believe they existed.