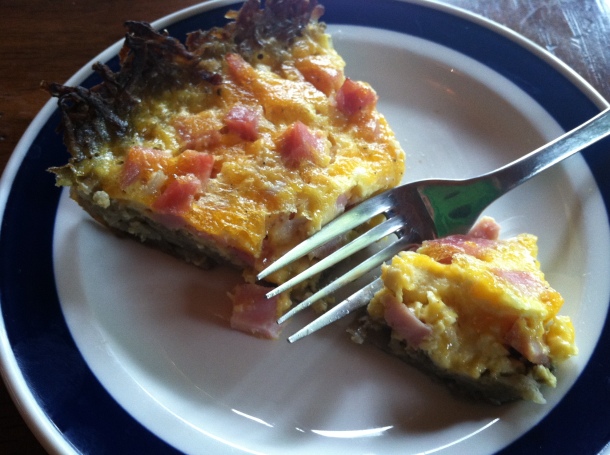 After all, everyone has one. A quiche, recipe that is. It’s like you shouldn’t be allowed to have brunch if you don’t have your own quiche recipe in your back pocket. Even my six-year-old knows how to make a broccoli quiche, although for some reason hers has tons of gluten in it. On the gluten-free front, however, my mother-in-law has a new hot quiche number.

My MIL has been experimenting in gluten-free ever since I got the sad news about cake. Which is nice, when you feel like you’re the only one who is cooking without gluten in your family, and they just don’t understand, and they’re going to feel bad when you run away. Or something.

So my mother-in-law brought over this gluten-free quiche, that instead of going straight-up crustless, had a twist: Hash brown crust! So it’s like a breakfast buffet in your mouth. That sounds awesome, right?

Like any quiche recipe, you can add what you like. I chose to ham and cheese it up, because that’s how I roll. Please feel free to go veggie with the leeks, asparagus, really, whatever floats your gluten-free boat.

Here’s how you can get your own mother-in-law quiche.

2. Gently press the shredded potatoes (you can also use frozen hash browns) between paper towels to dry them as much as possible. Toss the potatoes with melted butter in a 9 inch pie plate. Press them into the bottom and up the sides to form a “crust.”

3. Bake for 20-25 minutes until golden brown and starting to crisp.

4. Meanwhile, in a large mixing bowl, combine the remaining ingredients. When the hash brown crust is ready, pour the egg mixture over it and return it to the oven.

5. Lower the oven temperature to 350* and bake for about 30 minutes until the quiche is puffy and a light golden brown on top.