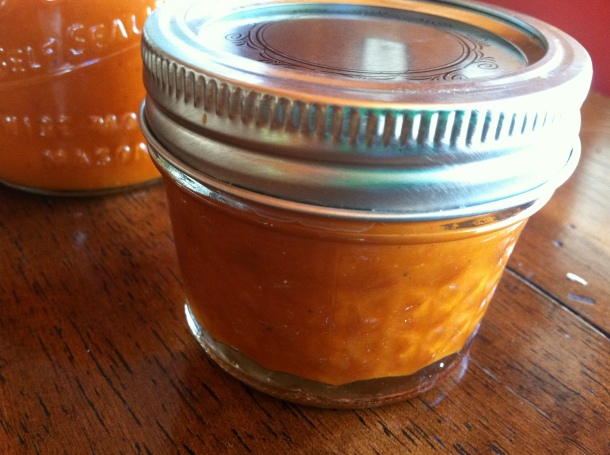 Here’s the thing. I don’t even like ketchup. Plus, ketchup is (most of the time) totally gluten-free. So why, pray tell, did I decide it was a good idea to make up some ketchup in my own home? Sterilizing the jars, spending hours slaving over something that you can buy pretty cheaply at the store. Something that I don’t even like to eat.

You know when you have kids, and they start doing things like making suggestions that seem wise beyond their years, one can cave. Which is what happened when my daughter pointed out we had all of these gorgeous fresh tomatoes from our CSA, but we probably wouldn’t eat them before they went bad. Hey, she said, why not make ketchup? Why not, indeed, I said.

Here’s why not. Ketchup making is laborious, and not so satisfying. Still, I made ketchup, bitches! Here’s how.

1. Place all the vegetables in a large heavy-bottomed saucepan with a big splash of olive oil and the ginger, garlic, chili, basil stalks, coriander seeds and cloves. Season with the pepper and a good pinch of salt.

2. Cook gently over a low heat for 10 to 15 minutes until softened, stirring every so often. Add all the tomatoes and 1 1/2 cups of cold water. Bring to the boil and simmer gently until the sauce reduces by half.

3. Add the basil leaves, then whiz the sauce in a food processor or with a hand blender and push it through a sieve twice, to make it smooth and shiny. Put the sauce into a clean pan and add the vinegar and the sugar. Place the sauce on the heat and simmer until it reduces and thickens to the consistency of tomato ketchup. At this point, correct the seasoning to taste.

4. Spoon the ketchup through a sterilized funnel into sterilized bottles, then seal tightly and place in a cool dark place or the refrigerator until needed – it should keep for 6 months.

Makes: Not enough for the effort