Why yes these ARE gluten-free Mickey waffles

Okay, so no one goes to Disneyland for the food. Well, unless you’re able to eat gluten and then you line up for churros and shove them in your churro hole. For those of us who can’t eat gluten Disneyland may be a friendly place, but you still need to be prepared, because shit can get real.

Here’s the thing. When you take two kids to Disneyland it’s all about them. Even if you’re on the hunt for gluten-free goods you’ve got to take a detour to Tomorrowland, slide on through to Fantasyland, race through Frontierland, and stop in Critter Country before they melt down across the way at California Adventure after waiting in line for TWO FREAKING HOURS to take a ride at Radiator Springs. Two hours you guys. Or two hours and an extra 15-20 which we’re pretending didn’t happen because there’s no excuse for that kind of waiting, even if your son has been talking about Cars Land for over a year and all he wanted for his birthday was to go to mother scratchin’ Cars Land, and he happened to be puking his brains out on his birthday so his birthday party was delayed one week. Have you ever been in a line for ANYTHING for two-and-a-half hours? I didn’t think so. Because you’re smarter than we are.

After all of that, mama is hungry and Flo’s is only serving breakfast. And while this gluten-free breakfast may look appetizing- 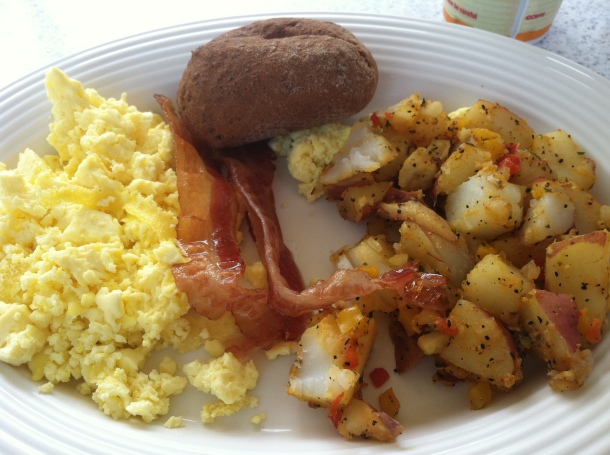 Dudes, it’s not. It tasted just like that Air Canada gluten-free breakfast I had, yet I was still at California Adventure instead of on my way to Paris.

So I was starving, and freaking out about gluten while my kids were all, “Where’s Goofy???!!!!” and “Mama, why are you crying?”

Still, there are options. Lots of options, because anytime you sidle up to an eatery and declare your gluten-freeness, a chef comes out to make sure you are taken care of in a safe way. Which is great. Because if you have just a little bit of patience, and aren’t in a super duper rush, every Disneyland restaurant and hotel has gluten-free options.

This especially comes in handy when everyone else was able to at Redd Rocket’s Pizza Port but no, you waited until you got back to the hotel room because yes, they have gluten-free pizza but it will take a while, and the rest of your family is about to melt down and MUST EAT NOW AND THEN PASS OUT. So at least when we went to crash, I could still order this from room service-

Note the cute ‘allergy’ stick in my gluten-free pizza? 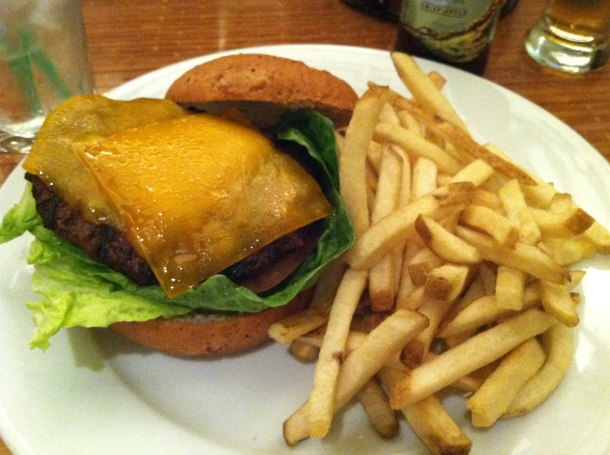 That’s a gluten-free bun, and specially prepared gluten-free french fries in a designated fryer at the Paradise Pier Hotel. I swear I didn’t eat both these entrees at once. But I wanted to after subsisting on popcorn, cotton candy, Cheetos and frozen lemonade between ride hopping. Which is why I should have been carrying muffins in my purse. You should too! And then Disneyland will truly be the happiest place on earth. Muffins. Mmmmmmmmfff.