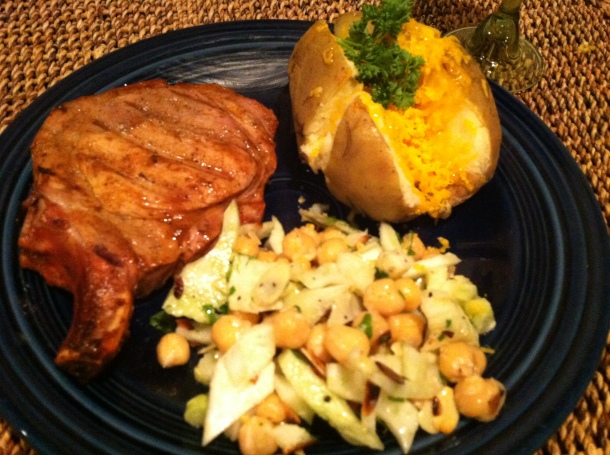 You know you’re all into the mid-century ad business/out of wedlock sex/Roger’s Thesaurus happening on your basic cable, the AMC. In case you missed it last week, Mad Men came back and those clothes and hairstyles are getting wacky! Yep, times are changing for the crew at Sterling, Cooper, Draper, and Pryce (is it still Pryce? Unclear), and whatever Joan’s last name is. Since Don remains the same, the way we should eat and drink while enjoying watching that guy implode should remain firmly in that era as well.

I’m guessing they’re probably still eating big hunks of meat and having starchy sides since I don’t think vegetarianism hit the non-hippie class until at least the late ’90s. With that inspiration in mind, this was my dinner for the season premiere. And I’ll damn well be eating something similar every Sunday night until, what, June? When is this show ending, anyway? TV today is so confusing what with its non-seasons and cable.

Anyhoo. Pork chops bone-in, baked potato, and then this lovely fennel, chickpea salad I made from the cookbook I’m obsessed with, Jennifer Perillo’s “Homemade with Love.” Digging it. Other than that salad (recipe found in her book, it’s not online), there’s not much of a recipe situation here. Because I used my old favorite standby of Stubb’s Chipotle Butter as a marinade for the pork chops, then threw them on the grill. Of course my baked potato was all old school: 450 oven for 1 hour. Slice, pat of butter, grated cheddar cheese if you’re so inclined (I am) and parsley for garnish. Voila! You’re done with the cooking and ready to get Draper’d.

What do you think? Who dies this season? I’m thinking Roger.

Oh, and I’ll be cooking again with more recipes soon. Had a bit of a tour through gluten-free snack town last weekend in support of my new little celiac, and we’ve just kind of been eating out of packages. Sad, I know.

2 thoughts on “‘Mad Men’ Meal for the Gluten-Free”