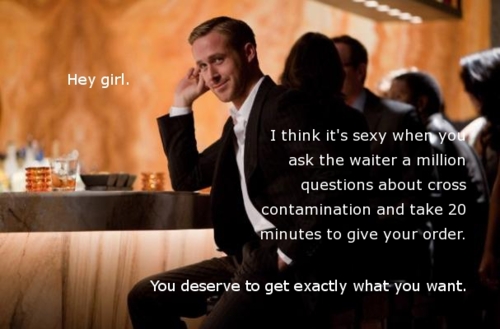 Well. Actually I’m flying all about the country, so technically not a highway. Unless you want to call it a highway in the sky. Which maybe we do! The point is, damn I’m a travellin’ fool and I have not even stopped to tell you lovely people much of anything. Not even about the fantastic gluten-free meals I was able to have in New York City and how I navigated three boroughs without getting the least bit sick! (More on that amazingess later.)

Then how I’ve been planning basically the best party ever in one of my former hometowns of Austin, Texas at my older brother’s restaurant, Frank, and how it’s going to be a paradise of gluten-freeness. A PARADISE. See?

And THEN I’m headed off to Chicago to speak at the Printers Row Literary Festival wherein I will give a cooking demo that just might knock your socks off. Or at least make you able to throw a kick-ass gluten-free party. I am armed with a stellar restaurant list from Chicago native, and fabulous blogger over at The Other Side of the Tortilla. I’m livin’ it. Livin’ it good. And then.

And then I stopped off for breakfast/lunch on my way back from the airport and on my way to work and picked up some tacos. TACOS GAVE ME GLUTEN. This is usually not possible, but I think there’s something fishy going on over at the Baja Fresh because I’ve been there twice, and wound up on the bowl that same number of times. Of course, both times when I asked about gluten no one had any idea what I was talking about so shame on me. Really. I’m not even following my own advice to run away when someone stares at me like I have two heads when I say the ‘g’ word, instead of simply fucked up intestines. Ahh, well.

Onward. Into the airport of doom I go, carrying with me my own gluten-free snacks and a three-day gluten hangover. WISH ME LUCK.

Oh, and come see me in Austin, Chicago, and later San Francisco, Portland, and Seattle! (More, more on that later too.)

6 thoughts on “I’m On a Highway to Gluten”