Before any of you lifelong Californians or folks from the Far East jump in, let me just inform you that I come from the land of tornadoes, came of age in the land of the occasional terrorist attack, and am very, very new to the land of the “you-never-know-when-it’s-coming” earthquake. I guess it’s just what you’re used to because, HOLY HELL THESE EARTHQUAKES ARE FREAKING ME OUT!!!!

I mean, let’s be honest, not as much as a terrorist attack, but still. It’s been a shaky couple of weeks. And one thing I worry about, of course, is what to eat during a disaster. OK, once I know no one is dead or seriously injured, ALL I think about is what I’m going to eat. Red Cross isn’t gluten-free you guys. (Is it? Maybe I’m unnecessarily judging.) Anyhoo.

We have stockpiled water, some canned goods (but let’s be honest, not cooked? that’s gonna’ suck) and randomly some V8 in case things get really desperate. Which is why I was stoked to get a box of RATIO bars from those nice folks right after a couple of medium ones hit. 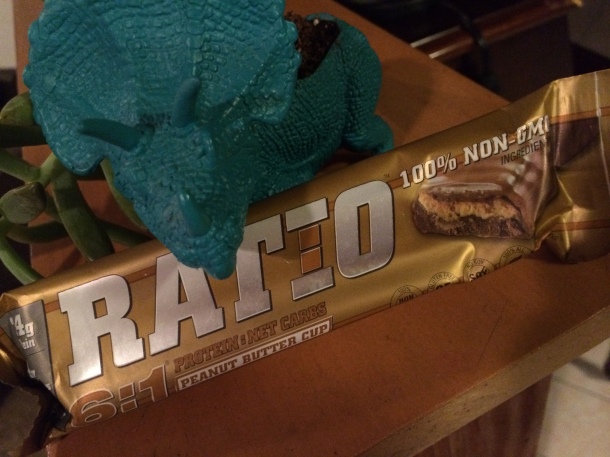 I’m not totally a “protein bar” kind of girl, yet I am a gluten-free eater who can get really ‘effing sick if I don’t have anything but gluten around. Like, you know, while traveling, after an earthquake, etc. In addition to the gluten-freeness, there aren’t any GMOs up in here, no soy protein, no artificial ingredients and no hormones. None of us need hormones, especially during a natural disaster. Since RATIO has peanut butter, well, I’m all set. I mean, I’ll have to fight that dino for it, but I’m feeling pretty excited about my stash the next time a biggish one comes.

Do you have an emergency gluten-free stash?

21 thoughts on “How to Survive a Gluten-Free Earthquake”