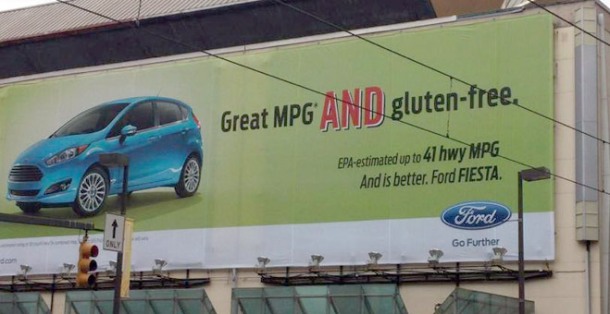 Recently The Onion posted what I thought was a hilarious guide to going gluten-free. Hilarious, because it had fantastic suggestions such as:

I loved that the parody did not feel mean-spirited, and that it had a ring of “wow, wouldn’t that be great/awful?” to it as well.

And then I saw the Ford billboard above that Gluten Dude posted and thought that was hilarious as well. Not as funny as “murder all bakers in proximity to your home” but still, I chuckled.

At this point one might think I’m the easiest audience ever. One might be right, but today I saw Jimmy Kimmel’s “Pedestrian on the Street” segment and wow, did I not think it was funny. Maybe it’s because it hits too close to home as these people are most definitely dining in the same restaurants as I am in LA, and talking to the same waitstaff that I give my speeches to when I want to eat without getting violently ill. Or maybe it’s because I can’t seem to get over that gd queso gluten-ing and I’m over-cranky, but I did not find this funny. At all.

This video is the “gotcha'” equivalent to going to the Olympics and asking Americans to name the leaders of every country competing right after they fist pumped yelling, “USA! USA!” Just because you enjoy something doesn’t mean you know every single thing about it. So, great, now we have proof people stop eating gluten to lose weight, or because it’s trendy. We all knew that before, and frankly, I had no (or little) problem with it since it spreads awareness. What this sketch does, however, is make everyone on the gluten-free diet look ridiculous, and in turn, make people think that gluten-free eaters should not be taken seriously.  That is not helpful to me. Or to anyone else who faces serious illness if gluten makes it into the body.

Instead of shooting fish in a barrel, maybe ask the experts. Like me, and all of you guys*. Because yeah, that would be embarrassing if someone who literally wrote the book on the annoying things about gluten-free didn’t actually know about gluten. But these people running in Griffith Park? That’s not a fair fight.

Listen, comedy is subjective and I’m certainly not claiming to be the tastemaker of all gluten jokes. (Although if someone is hiring for that position, I’ll certainly raise my hand.) I do think, however, that I can tell when I’m being made fun of, instead of being entertained. Jimmy Kimmel and his staff clearly want to shame people, and unfortunately those of us with nothing to be ashamed about, will get lumped in with those who may be rethinking this trendy diet today.

And yes, I know it’s not a comedian’s job to make sure I don’t get cancer, but to encourage intolerance for a health issue that I have zero control over is not cool. And it’s certainly not funny. It’s a call to make fun of the gluten-free because clearly we are all too stupid to deserve any kind of consideration. ‘Eff you. No, really.

*By the way, gluten is made up of proteins that can be found in grains such as wheat, barely, rye and triticale that is responsible for the elasticity in flour and for making me poop my pants.