This girl turned 9 last week, and I couldn’t think of any better birthday for my Harry Potter obsessed gal than a trip to the Wizarding World of Harry Potter right smack in the middle of Universal Florida. Yes, we do live within spitting distance of Universal Studios in Hollywood, but they don’t have the Potter. Yes, it was slightly embarrassing when people asked where we were from and we had to tell them we lived next door to Universal in LA but chose to spend loads of money flying across the country and staying at a hotel and getting our wizard on. But you know what? Who cares! It was this much fun –

Also, the night we were there Olivia Freaking Newton-John was in concert and she totally nailed our favorite Xanadu songs. I might have just flown to Orlando to see that lady rock it out. And taking my daughter to her first real concert where we both knew all the words to the songs? Ummmm-azing.

What’s always not so amazing when I travel is the getting sick factor on account of not knowing my arse from a gluten filled airport meal.  Luckily, I had some guides in the form of GFOrlando and Eating Out Without so I knew I’d be able to swill Butterbeer, if I so chose. I did so choose. So did she –

While it’s not dairy-free, and in fact feels chokingly filled with dairy, Butterbeer is GF. Along with the pumpkin juice, the Strongbow cider, and the Gilly Water. And if you’re thinking about hanging out all day around Diagon Alley, you should know there’s a stand near the Knight Bus where they serve potatoes in their jackets and the broccoli and cheese version is totally gluten-free. 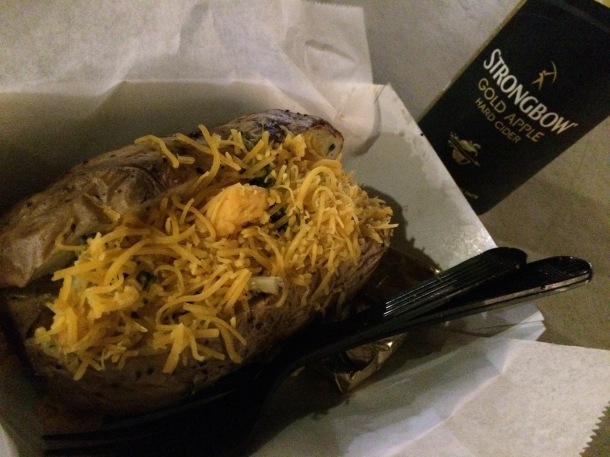 Actually, the lady running the stand was super confused as to why ALL the jacket potatoes wouldn’t be gluten-free, as was I. She did her best to research it but neither of us were satisfied with the answers provided in the customer service guide. Still, you could do worse than a quick ‘tater with cheese, broccoli and a side of cider.

And here’s some good news. If you go ask the dining booth set up right inside the park where you can eat and be safe, they’ll give you expert tips on Mythos (voted best amusement park restaurant repeatedly, which makes me wonder how that all works, exactly) and Confisco Grille. Since those are two sit down restaurants, they are the best options if you need to speak to a chef. We went for Confisco and I swear to Yesus that was an Udi’s bun on my burger.

Right? They did however, promise caramelized onions on the menu and those are far from caramel. Still, it was super delicious and our waitress was so attentive I felt like she was reading my mind. So I ate well at the park and had a damn good time.

Even our hotel was all hooked up and g-free even if one would never know it by looking. Nothing at the Cabana Bay Beach Resort was marked GF at the hotel diner, but I decided it was worth asking. I spoke with Chef Kevin, who hooked us up with second dinner. 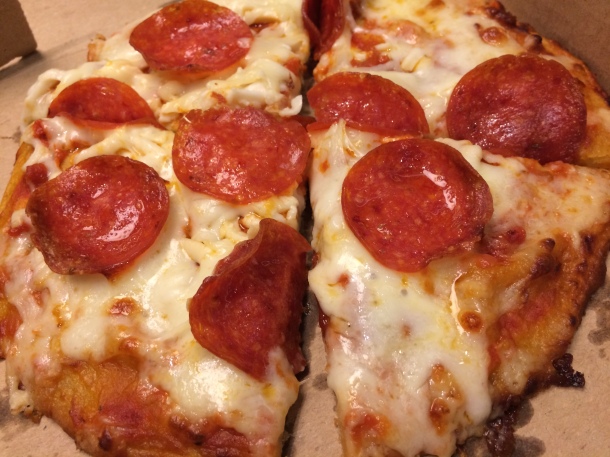 Kevin informed us that while there are no signs advertising gluten-free options at the Bayliner, they do have gluten-free yums that the chef will prepare specially, with no cross-contamination. This pizza was pretty fun and Kevin was super informed about the safety of feeding the gluten-free. And, he was a very nice man. Not at all like that Florida Man you hear so much about.

Oh, and the reason we had to have second dinner was kind of lame. We got into town on my daughter’s actual birthday, and I had planned a dinner at the Bob Marley restaurant, A Tribute to Freedom, which may have been my first clue that food wasn’t the number one priority there. I, however, was especially excited to dine there on my girl’s birthday because she shares a birthday with Mr. Marley and I just assumed shit would be getting real up in the cafe. Instead, A Tribute to Freedom was very quiet and filled with jerk meats.

My jerk steak salad was lovely, and it was nice having a clearly marked GF menu, for sure. It was just a let down since I’d built it all up in my head that we were going to get all funky up in Bob’s restaurant and instead I wound up telling too many people how it was my daughter’s AND Bob’s birthdays—to no effect—and gagging down a green cocktail. Also, the conversation naturally drifted towards marijuana and I ended up having “the talk” with my daughter who is now terrified of the Reefer Madness, despite my best intentions. Anyhoo. The hotel was great!

I chowed on omelets and gluten-free pizza while we weren’t busy floating down the lazy river at the Cabana Bay Beach Resort. There’s not much better than a lazy river, in my opinion. My daughter loved her first lazy river experience too, except for that moment when these juvenile delinquents from the side of the river soaked us with water guns and I called them “Little ‘Effers.” For some reason that embarrassed her. I’m only assuming that’s the first embarrassment of many. Also, my credit card number was stolen while I was at the hotel, which was also a bummer (and very embarrassing to my daughter who somehow saw this as a personality deficit, on my part. We’re in the tween years!). While the staff was incredibly helpful and security was all over it, it’s not so rad to have your money cut off on vaca. Still, we truly had the best time ever and I not only did not get sick, but was even getting my belly back to normal’ish after months of pain, by the time we left on Sunday. Well played, Orlando. Well played.

BTW, I got NOTHING free for these super recommendations. Which makes me realize, I’m doing this whole blogging thing wrong.