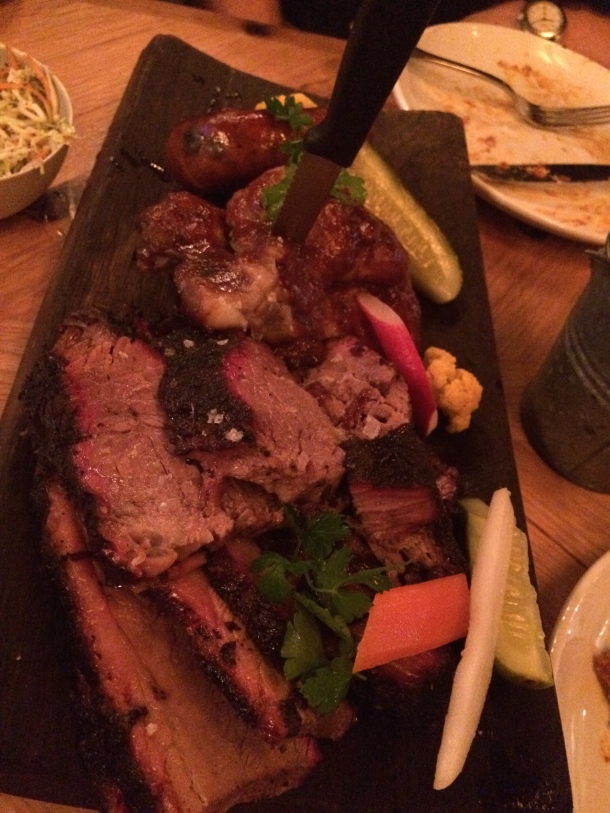 Avert your eyes, vegans. I’m about to lay some serious meat down on you with even more meat on top of that. Smoked meats, meats in beans, meats on top of Frito’s—Barrel & Ashes has got all of that and it’s very, very gluten-free friendly.

Once again, I found myself in a dark restaurant which isn’t the best to photograph when you only carry an iPhone with zero photo apps (I’ve really got to to do something about that). But how much light do you need to show the awesomeness of a gluten-free Frito chili pie? This much:

And this is where I say this restaurant in Studio City is gluten-free friendly, rather than straight up gf. While the smoked meats are naturally gluten-free (huzzah! the brisket is the one to hoard, try the jalapeno cheddar sausage too), the wait staff—while charming—aren’t fully clued into the gluten-free world. Which is fine, in the sense of they’re serving tons of smoked meats, it’s not their biggest priority and even I get that. And luckily most items on the menu are naturally free of gluten, so you know there’s a very low chance of cross-contact. But when you’re trying to be super safe and you feel like the conversation you’re having isn’t really registering, well, it’s best to stay with what you know is free of gluten. Like meats.

But I received mixed reports on that delicious Frito chili pie. The first time I went to B & A, I was told it was off-limits. The second time I was with a group and the appetizers were mostly off-limits so I made sure to double check on the Frito chili pie. In my world, Frito chili pie should always be gluten-free, but many people add thickeners to chili that could contain flour. Hence, my concern. This time I was told I was safe if “Fritos were gluten-free.” This made me nervous, but not too nervous to grab a bite. Perhaps my stomach was a little rumbly? But I’m not 100% sure. Which means next time I’d better skip the chili pie. This is my sad face 😦

Again, the brisket is insane and I crave it daily. The sausage is also to die for, and the ribs are amazoids. I loooooove the baked beans with the pork belly. I mean, who wouldn’t? And the greens are delicious and I can’t imagine what could be inside that would make me sick. So stick with that, people and you’ll be happy.