I’ll be honest. I hate gefilte fish—vegan, gluten-filled, or not. It all began two Passovers ago when I made gluten-free gefilte fish and it spilled all over my brand new car. No, it hasn’t ever smelled right since. So when I saw a recipe for vegan gefilte fish, I thought, “What’s the worst that could happen?”

So I played around with this vegan recipe and made it gluten-free as well, and voila! Completely non-traditional seder food. As someone who does—under non-gefilte fish conditions—prefer to keep it as traditional as possible, I have to say that I would rather eat this vegan, gf version any Passover of the year. Plus, it’s super easy. 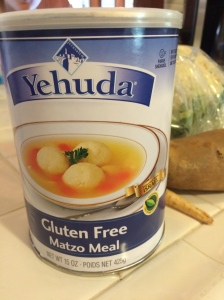 So the gluten-free types have been able to enjoy the season for several years already.

As far as the vegan portion, well, I don’t know what that weird jelly is when you buy gefilte fish, but I’m very happy to not have that at my table tonight. Removing the egg for stick-to-it-ness did not seem to effect the final shape of the GFV gefilte either. Which should look like this before you put them in the pot—

But you really do need to watch the clock when you’re cooking, one minute too long and they will fall apart. And since I actually prefer potatoes, parsnips and cauliflower to white fish, well, the vegan’izing of this dish was a-OK with me. Better than OK since I actually ate this version. Now, let’s get on with the hiding of the (gluten-free) matzo!

Here’s how you do it up:

a squeeze of lemon, to serve

1. Peel your potato and parsnip and cut into small pieces. Break the cauliflower into florets.

One thought on “Gluten-Free & Vegan Gefilte Fish for Passover”