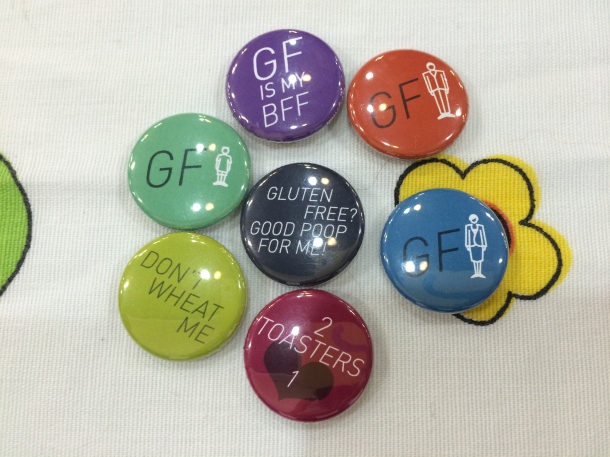 It’s Celiac Awareness month, you guys. And that means no better time for the informational, yet delicious, kick in the pants that is the Celiac Disease Foundation Conference & Expo. As an “official” blogger I was all up in the business of all of it and now I’m here to share the fun. As much fun as one can have when discussing a disease that prohibits deliciousness. Still, I heard there were Schar gluten-free croissants at breakfast!

That’s right, I heard. Because I thought I’d take another half hour to sleep in and have breakfast at my house instead of showing up early. The early bird gets the croissant, apparently. PHHHHHPT. I’ll be waiting patiently at my local grocer for those because I heard they were pretty danged good. Let’s break down the rest of the biz.

Yes, I do love her and want to marry her and her cinnamon buns. If you guys are up around Santa Clarita, or even 50 miles + away, head up to the Farmer’s Market and buy her goods. I’m going this weekend and I’m STOKED. These cinnamon buns were to die for. TO. DIE. FOR.

I was delighted to hear Dr. Joseph Murray from the Mayo Clinic speak, as it’s always great to refresh your memory about how celiac disease works, and what you need to know. I will double down on my vitamins, and remember to watch out for other sneaky symptoms. I will also keep bugging my family members to be tested (although most of them have) because the shocking number of undiagnosed celiacs makes my heart hurt so much.

The other information I needed to hear again (I can’t believe how much we forget when we’re in the middle of the shit) was that my daughter’s blood test was probably not accurate given the low amounts of gluten she consumes. Which means, dammit, we’ve gotta’ scope. Good timing to hear yucky news.

Dr. Murray also went over the drug trials and it seems like we’re always in that “maybe sometime soon we’ll have help” space. I’ve also come around on the meds that you can take before you eat just in case you get gluten. I used to think, “Umm, I get to full-on eat gluten, otherwise I’m not taking ANYTHING.” But having been gluten’d 3 times in the last 5 days by cross-contact and an errant bread crumb, I’m all about those accidental moments being handled. So let’s keep crossing our fingers, shall we?

Tito’s vodka continues to be a presence in our space, but flat out handing out vodka and lemonade was genius. GENIUS. Happy to see them on the boozy kick at the Expo since, you guys, there was NO BEER at the CDF Expo this year. No beer! Thank god for Tito’s. And that’s not the first time I’ve said that.

For some reason three of my absolute faves at the Expo will not be represented in photographs today. My theory is I got too excited scarfing down the gluten-free gnocchi bolognese, gluten-free sausage and the gluten-free sour dough bread to actually take pictures, but YUM. I’ve already talked about the amazing The Addiction Bistro, and they were there showing off the pasta and sauce. I must go back, and maybe this is a good time to recommend it as a perfect Mother’s Day Brunch spot. Aaron?

I was also too busy stuffing Jones Dairy Farm sausages into my gullet to take a photo. And I gave them a hard time because I never see their delicious sausages in my usual stores. Then I came home to a flier with an ad for, yep, Jones Dairy Farm at a close by grocery. So, go check that out you guys. It’s been naturally gluten-free for, like, ever.

And if you all have not enjoyed the gluten-free sourdough from Bread Srsly, you’re about to thank me a million times. In addition to being the nicest lady in the world, Sadie makes the best gluten-free bread, hands down. I just found out they sell it at my local Erewhon, which makes me SO happy. And you can buy it online at her shop. DO IT.

You know I’m a fan of the gluten-free Cheerios happening any second now, and so is my daughter. Honey Nut will be up in my business this fall. Big time.

I’ve also talked about Crafted before, and now that they have a kid sleepover box coming out, I’m even more excited to see how they rock it! I LOVE Nicole’s Naturals gluten-free waffles, and I can never find them in stores. So this is a special treat, indeed. (P.S., I did not win that in a raffle. Dang it.)

And these new people I fell in love with. The Gourmet Friends have been doing a lot up there in the Redlands, and I could not get enough of their candies and snacks. SO good, and these ladies were the nicest. I’m going to do one of those online orders since I know how to use my computer. I hope to see their yums in stores asap.

So those are the highlights! Oh, and seeing old friends, making new ones, and getting to see familiar faces that have been hanging out with me enjoying samples of the gluten-free candy for the past four years. A hat tip to Udi’s/Glutino, Lay’s, Breton, Potapas, King Arthur, Hodgson’s Mill, Schar, So Delicious and all those other amazing companies that keep on keepin’ on. ‘Til next year!

6 thoughts on “Tales From the Celiac Disease Foundation Expo & Conference”