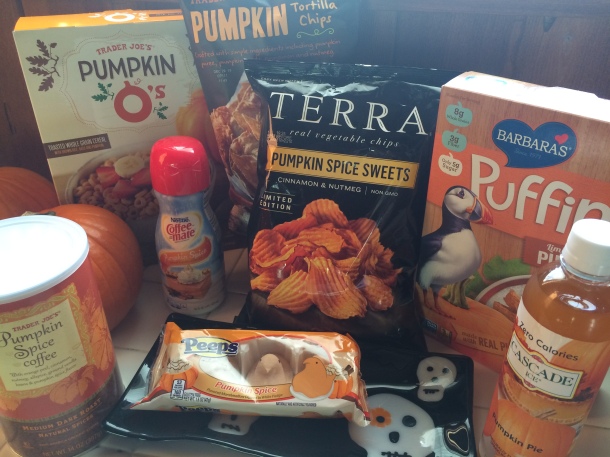 Happy Fall Holidays, people! That time of year when YOU CAN’T ESCAPE THE PUMPKIN. While I respect the fed-up who say they will not allow a pumpkin flavored crumb to touch their lips, I decide to double down when Barbara’s sent me their Puffins limited edition pumpkin cereal and just see how much gluten-free pumpkin, pumpkin spice, and pumpkin rando foods I could eat! I also made my family, and here’s what we thought.

The Girl-I don’t usually like Puffins, but this tastes good.

The Boy-I’m not much of pumpkin guy.

Hubs-Awesome. I’m going to have these tomorrow morning for breakfast. Are Puffins from Iceland?

Moi-It might just be the Paleo diet talking, but this is the most delicious cereal I’ve had in weeks.

The Girl-I bet the Peeps are going to be horrible. (after eating) Amazing. Can I have yours, Mommy? Too sugary to hate!

The Boy-I think I’m going to literally hate this. (after eating) Mmmmm! This is amazing.

Yes, I know. Anything circular and oat-like is not awesome for celiacs right now. So I only popped one in my mouth.

The Boy-I want these for breakfast tomorrow.

Talking the children into trying black coffee was easier than I thought.

Moi-I prefer just the coffee, to be honest. But that’s probably because I’m a psychopath.

Now there are two words you never dreamed would go together: “water” and “pumpkin.”

The Boy-I’m never trying this ever in my life. NO. (5 minutes later) Okay, I love the pumpkin soda. As seen here-

The Boy-These are really good.

The Girl-You can’t taste the pumpkin.

Hubs-I can totally taste the pumpkin.

So our faves broke down like so (yes, I know the numbers don’t add up, we are an indecisive family and chose multiple “favorites”):

Pumpkin Spice Peeps – 2 votes from I think you know who