Holy crap balls, people. I’m shocked to still be here and not completely burned to a crisp on the side of one of the many Los Angeles freeways I’m forced to drive upon in this hellish beginning to summer, because I just freaking gave up and gave into the fire. How are you? Hot as fuck? Hot as fuck. Me, too.

While the heat can, at times, curb the ol’ appetite, a human’s still gotta’ eat. Sure you can go out for tacos, as seen above (psssst, I’ve found the holy grail of gluten-free queso!!!!), but going out to eat also means getting into your car that is probably just sitting there waiting to burn your skin off. So unless you’re a raw food type, that means you’ve gotta’ cook. But no one wants to add heat to hell, so what’s a gluten-free, sweaty, gal to do? This.

Yes, this is the first thing to do. Get a gluten-free pizza sent right to your house. But be sure you tip well because that poor dude got into his hot car and sweated his way to your house while you were inside with the shades drawn playing WiiU or whatever it is that you do when it’s hot AF.

But you know as well as I do that delivery is mostly not an option for us gluten-freers, so if you MUST prepare your own food, use as little heat as possible. I mean, do NOT turn on that oven. DO NOT.

Try these less-hot dishes instead.

Okay, fine. Salad is such an obvious hot weather option, but I just got this super great gluten-free cookbook, Yummy Supper by Erin Scott wherein she gives us the brilliant idea of serving a deconstructed California Cobb Salad. I’m not sure why I hadn’t heard of it before, but now that I have it I lurv making dinner, drinks and other random meals from this lovely book. I especially love it if it requires no oven at all. And this one is even better when you have picky kids who only want a “bacon salad” or the like. Put it out for the people and let them choose. Just like Britain, but hopefully with less horrible consequences. 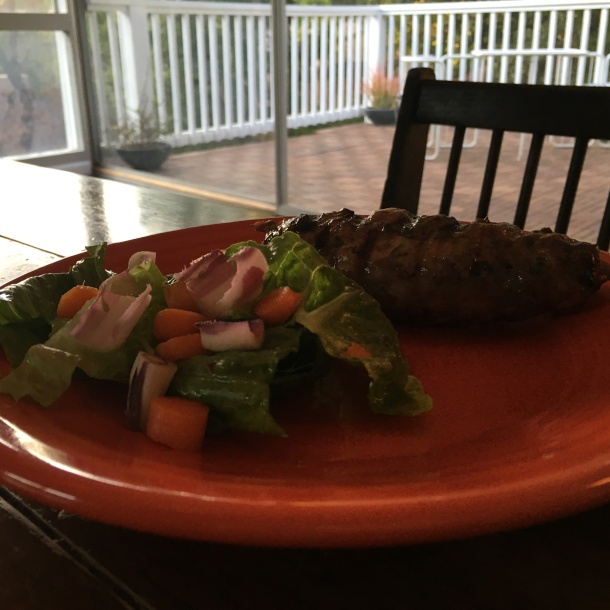 Another recipe from Scott’s book that required very little effort and heat in my kitchen was the Turkish meat sticks, to which I added a little side salad. I’m sitting in an air conditioned coffee shop right now and do not have the book in front of me, but basically this is some ground pork (recipe uses lamb, but I have lots of feelings about sheep), ground beef, pistachios, caramelized onions and parsley formed into a kebab and grilled. Bonus with this one is that my husband is in charge of the grill. Outdated gender roles or not, I can pretend not to hear him as he screams from the grill heat mixing with the 109 degree outdoor heat and hitting his face.

Pasta is also always a good option because you just boil water and never have to heat up the whole damn oven, which heats up the whole damn house. I like a little alfredo and since I had leftover bacon, bacon. YUM. It’s the easiest thing ever. Just make up your gluten-free pasta while you’re frying up your bacon. Crumble that bacon up and set it aside. Whisk together cream, half-and-half or milk (about 1/2 cup) with 1 cup of Parmesan and a pat of butter (or more like 1 tablespoon if you want it super yum) over low-medium heat and as soon as it thickens up, toss in that cooked pasta with a tiny amount of pasta water and add bacon. Salt, pepper and voila! DO IT.

And please, do go out for ice cream. My new favorite place is Jeni’s in Los Feliz where they know their gluten. And their ice cream, duh.

Okay, people. Let’s go kick summer in it’s hot ass!!!!! If all else fails, just jump into this—

Just make sure that beer is gf.