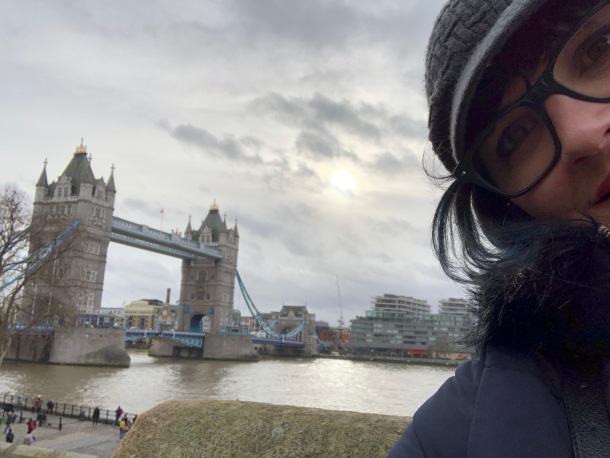 Hey gang! I just spent a bit of time in London and am now thinking about moving there. I’m kidding. Kind of. I mean it was fun, urban, safe—except for me never knowing which way to look for oncoming traffic—and we had an amazing time. Loved it. LOVED IT.

I checked a few sites to find out what was great and gluten-free and I also found some places on my own that worked. Because, as we know, sometimes you find yourself in a location that is nowhere near the best reviewed gluten-free fish and chips shoppe, and you’ve just got to make it work. It was not that hard, ya’ll.

My most favorite thing about gluten-free dining in London was how educated the staff were (in 99% of the places I dined) and clear on cross-contact. One rainy night we found ourselves at a local pub where it appeared the gf options were limited. They were, and became even more so when the waitress cancelled my order because the chef had accidentally put something in the dedicated fryer that had gluten on it. ACCIDENTALLY PUT SOMETHING IN THE DEDICATED GLUTEN-FREE FRYER. Have you ever had someone admit there was a mistake in the kitchen? And then say, “You can’t have this. It’s not safe.”? I have not, and even though I was sad about what I was left with, I was super relieved to never get sick the entire time I was in the UK.  That makes for a pretty great vacation, you guys.

I feel like I don’t even need to write this. Just go to London and be all, “Where’s the g-free at?” Everyone will wander out to offer you fish and chips and muffins. Like this spinach one, from an adorable cafe called Ripe Kitchen close to where I was staying. 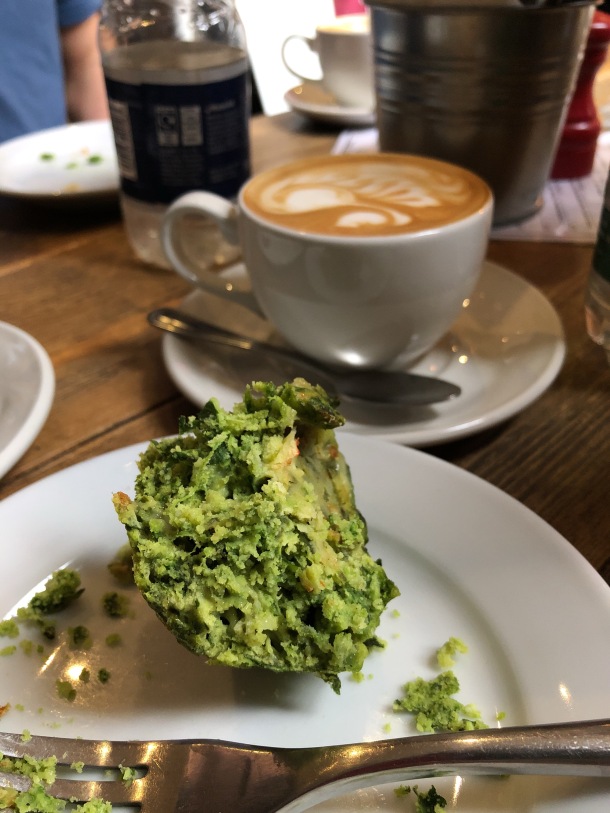 That was a good muffin, ya’ll. And a great flat white. They had a few other options as well, but a load of gluten’y pastries for those traveling with you. 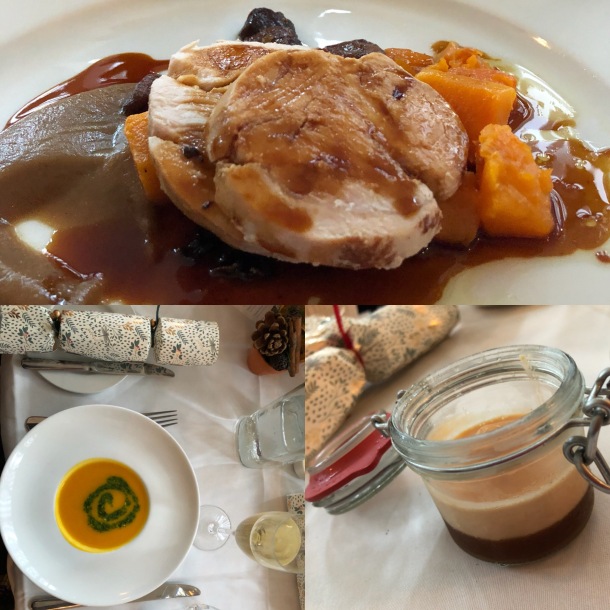 We spent Christmas in London, which was delightful. Even more delightful was this Christmas lunch at the Thomas Cubitt. I contacted them when I made the reservation for the prix-fixe Christmas luncheon and asked about gluten-free options. They had a special gluten-free menu for me when I arrived, but many of the options were naturally gluten-free like that delicious turkey au jus, pumpkin soup with pesto and pomegranate sorbet with a il’ ol vodka shot. I KNOW. Amazing. 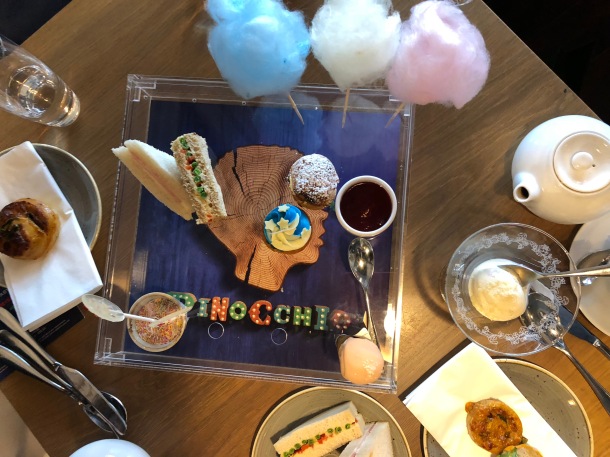 Here’s some more good news—the super fun tradition of afternoon tea in the UK can be found in the most interesting places, and most of them can be made gluten-free. I have a theater-loving daughter, so we opted to go on a tour of the National Theatre and top it off with a theater-themed tea. The current show was Pinocchio (although sometimes they throw in a mix of play-themed foods) and here’s what we had:

Again, when I made the reservation I asked about gluten-free options and they had a replacement FOR EVERYTHING. You guys. I love London.

Harrod’s – Galvin Demoiselle at The Conservatory 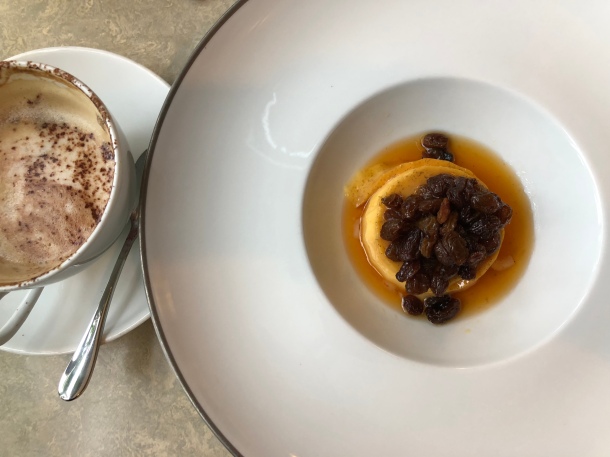 This is one of those examples where we were out somewhere (Harrod’s) and half of us had eaten breakfast and the other half hadn’t, and I just was like, “What’s gluten-free?” It was this creme caramel and I loved everything about it except the raisins. Ewww, raisins. That terrace, tho. 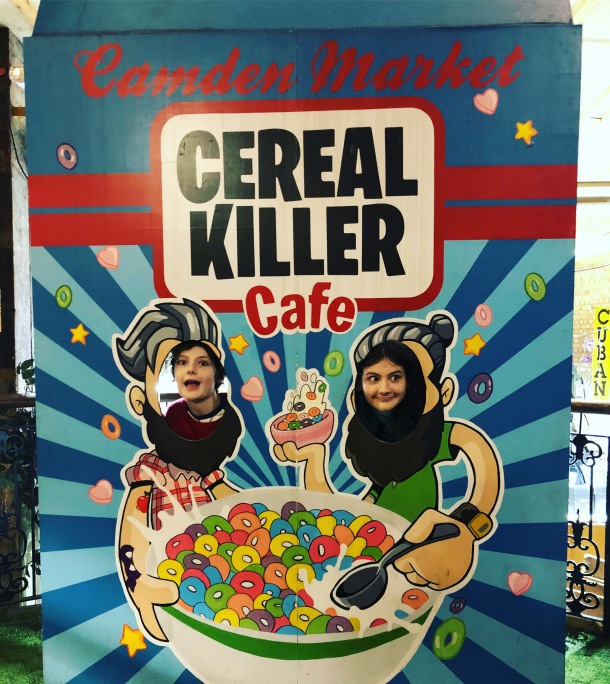 With a bazillion cereal options at this all cereal restaurant, you’re going to find your gluten-free options as well. They also have a variety of non-dairy milks, so everyone can find something super delicious and sickeningly sweet. It’s a dessert place, which reinforced what I’ve been telling my kids for years: “Cereal is not a healthy breakfast.” Nope, not even that one. Still, FUN. 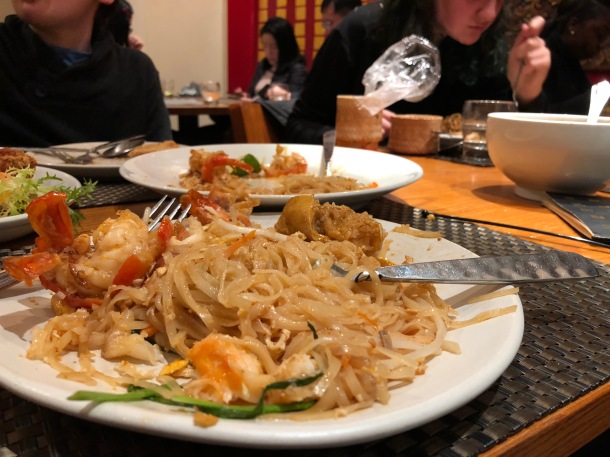 Many members of my family (okay, there are 4 of us and 2 said this) gave Thai Square the “best restaurant in London” award. It was amazing, and the menu was clearly marked with gluten-free options. Which was fantastic, as the server did not know a lot of English, and it was much easier to avoid making a mistake when ordering when you could read it in front of your face. 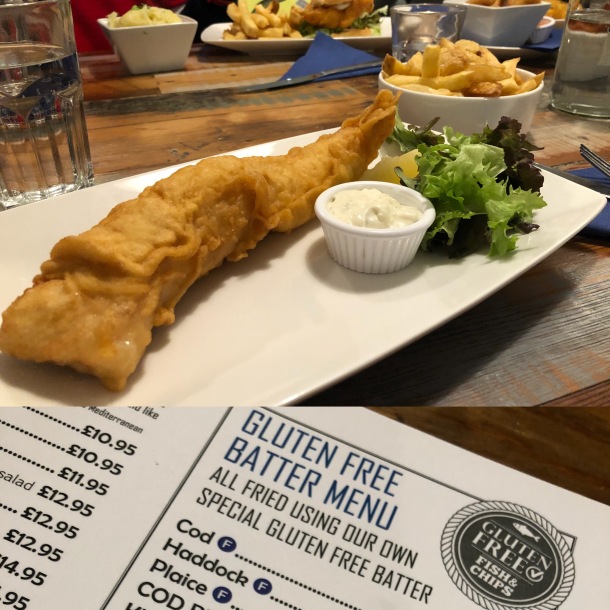 I don’t know why I thought I would find more gluten-free fish and chip options in London, but I thought they’d be throwing them at me when I landed at Heathrow. Still, hunting down the best meant I was super stoked once I sat down and ordered at Hobson’s. Their fries (chips) are always gluten-free, and they have their own batter to make your fish nice and crispy and safe. It was soooo gooooood. 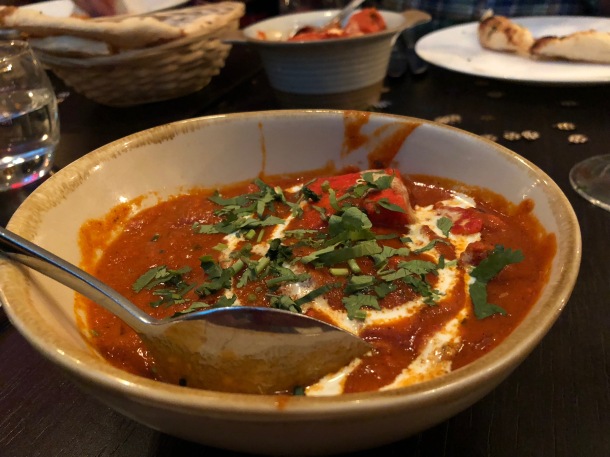 My most favorite meal in London was so nice I had it twice. Or some version of it, twice. We had Indian takeaway one hungry night from Namaaste in Camden, and all of us declared it to be the best Indian food we’d ever eaten. So we booked our New Year’s Eve dinner at the restaurant and wow, still the best. So much is naturally gluten-free, and they understood pitfalls as well. I’m still thinking about the coriander and lime chicken tikka, dal, and the tikka masala both chicken and lasooni paneer. Oh. My. Gerd. 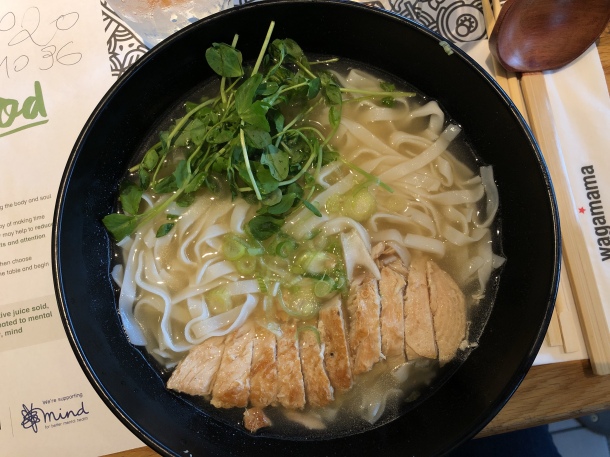 A lot of you fine people recommended the gluten-free ramen at Wagamama, and that’s why I’d totally go back even though my noddles were not quite cooked. The flavor was fab, and again, on a cold rainy day ramen is the shizzle. I also just read this chain has opened in NYC and Boston. Anyone checked out those locations? I do love some ramen, even better if it allows me to eat it without pooping my pants.

I missed a lot, I know. Which means I have to go back to the UK, ASAP, and eat everything else.

10 thoughts on “Gluten-Free London is My Favorite”